1:1 The former book which I have made, O Theophilus, of all that Jesus began both to do and teach, 2 until the day in which He was taken up; after that, He through the Holy Spirit had given commandment to the apostles whom He had chosen. 3 He also showed Himself alive to them, after His death, by many infallible proofs, being seen by them forty days, and speaking of the things pertaining to the kingdom of God. 4 And, being gathered together with them, He commanded them that they should not depart from Jerusalem, but wait for the promise of the Father, “Which,” He said, “You have heard from Me. 5 For John truly baptized with water; but you shall be baptized with the Holy Spirit not many days from now.”

6 Therefore, when they had come together, they asked of Him, saying, “Lord, will You at this time restore again the kingdom to Israel?” 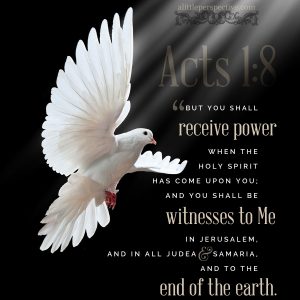 7 And He said to them, “It is not for you to know the times or the seasons,which the Father has set by His own authority. 8 But you shall receive power after the Holy Spirit has come upon you: and you shall be witnesses to Me both in Jerusalem, and in all Judea, and in Samaria, and to the uttermost parts of the earth.”

9 And when He had spoken these things, while they watched, He was taken up; and a cloud received Him out of their sight. 10 And while they looked steadfastly toward heaven as He went up, behold, two men stood by them in white apparel; 11 who also said, “You men of Galilee, why do you stand gazing up into heaven? This same Jesus, who is taken up from you into heaven, shall also come in like manner as you have seen Him go into heaven.”

12 Then they returned to Jerusalem from the Mount called Olivet, which is a Sabbath day’s journey from Jerusalem. 13 And when they were come in, they went up into an upper room, where dwelt Peter, and James, and John, and Andrew, Philip, and Thomas, Bartholomew, and Matthew, James the son of Alphaeus, and Simon the Zealot, and Judas the brother of James. 14 These all continued with one accord in prayer and supplication, with the women, and Mary the mother of Jesus, and with His brothers.

15 And in those days Peter stood up in the midst of the disciples, and said, (the number of names together were about a hundred and twenty),

16 “Men and brethren, it was needful for this Scripture to be fulfilled, which the Holy Spirit spoke before by the mouth of David concerning Judas, who guided them that took Jesus. 17 For he was numbered with us, and had obtained part of this ministry. 18 Now this man purchased a field with the reward of iniquity; and falling headlong, he burst asunder in his middle, and all his bowels gushed out. 19 And it was known to all who dwelt at Jerusalem; in as much as that field is called in their proper tongue, Aceldama, that is to say, The field of blood. 20 For it is written in the book of Psalms, ‘Let his habitation be desolate, and let no man dwell in it: and his office let another take.’ 21 Therefore of these men, who have accompanied us all the time that the Lord Jesus went in and out among us, 22 beginning from the baptism of John, to that same day that He was taken up from us, one must be ordained to be a witness with us of His resurrection.”

23 And they appointed two, Joseph called Barsabas, who was surnamed Justus, and Matthias. 24 And they prayed, and said, “Lord, You know the hearts of all men; show which of these two You have chosen, 25 that he may take part of this ministry and apostleship, from which Judas fell by transgression, that he might go to his own place.”

26 And they drew lots; and the lot fell on Matthias; and he was numbered with the eleven apostles.

The Greek Testament Biblical text is from the 1769 Authorized King James edition posted by Official King James Bible online. I have modernized words, spelling, and grammar. The linked studies, chiastic structures, and Scripture pictures are my own and are copyright © Christine Miller. All rights reserved.